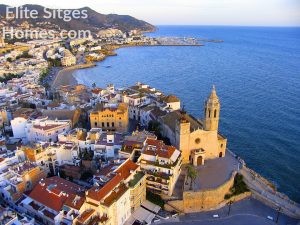 Sitges (Catalan pronunciation: [ˈsidʒəs]) is a town about 35 kilometres southwest of Barcelona, renowned worldwide for its Film Festival and Carnival. Located between the Garraf Massif and the sea, it is known for its beaches, nightspots, and historical sites.

While the roots of Sitges’ artsy reputation date back to the late 19th century, when Catalan painter Santiago Rusiñol took up residence there during the summer, the town became a centre for the 1960s counterculture in mainland Spain, then still under the dictatorship of Francisco Franco, and became known as “Ibiza in miniature” . There’s a certain magic in the air in Sitges.  For decades Sitges has been a meeting place for people from all walks of life. A sophisticated getaway for young and old, gay and straight, families and friends. The town is full to bursting with classic art deco buildings and the seafront promenade is lined with palm

trees. Its 17 beaches are some of the best on the Mediterranean coastline.There is something for everybody in this dynamic beach town. Families can enjoy the safe beaches, ice cream parlours and close proximity to theme and water parks. Bon viveurs will love the French restaurants and the architecture in the old town. Party animals can make the most of the bars and clubs on ‘The Street of Sin’. Couples will find romance in the cosy bars, rambling streets and blue seas. Artists will find inspiration from the bohemian atmosphere and the stunning light. Sitges’ microclimate means that it enjoys sunshine on average 300 days a year. It also plays host to major film, dance and culture festivals. There are reasons to come to Sitges all year round. 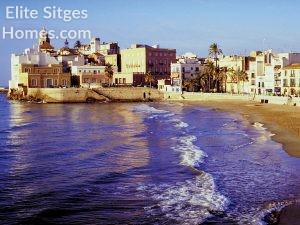 Almost 35% of the approximately 26,000 permanent inhabitants are from the Netherlands, the UK, France and Scandinavia, whose children attend international schools in the area.  Sitges was also the site of the annual Bilderberg conference held in June 2010.

Sitges has been referred to as the Saint-Tropez of Spain, with property prices approaching those of the most expensive European cities, the main reason for this being the setting by the sea and the surrounding Parc Natural del Garraf. Proximity to Barcelona-El Prat Airport is also a major advantage.

For over a century, Sitges has been celebrating nonstop — between the months of February and March, according to the liturgical calendar — Carnestoltes, or Carnival.

The festivities begin on Dijous Gras, or Fat Thursday, with the arribo, King Carnestoltes’ spectacular arrival. From the moment this character appears until the burial of the sardine — late afternoon on Ash Wednesday — you could well say that life in Sitges moves to a new beat.

carnival elements. The two most important moments are the Rua de la Disbauxa, or the Debauchery Parade, on Sunday night and the Rua de l’Extermini, or Extermination Parade, on Tuesday night. Some forty-odd floats with more than 2,000 participants fill Sitges. 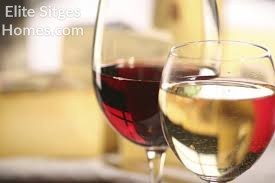 XATO- is Sitges’ most typical dish. Its first recorded mention is in local newspaper Eco de Sitges report on Maundy Thursday, published on 16 February 1896. The report refers to a meal that three days before had gathered together a selected group of Catalan artists and intellectuals, including Santiago Rusiñol, Miquel Utrillo and Gaietà Buigas. The name “xató” comes from an expression pronounced years before by Canudas, a member of the Rusiñol’s group. 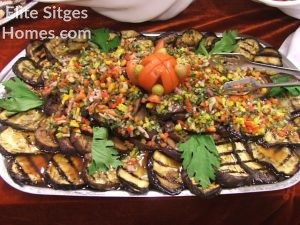 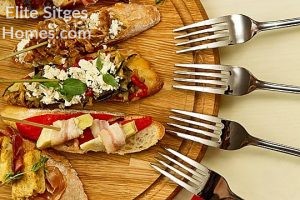 However, the essence of the dish is its sauce, made with scalded chillies, toasted almonds, garlic, olive oil, salt, vinegar and hot peppers. The complete xató meal consists of some different omelettes or fricandó (a typical Catalan hot meal) and as a dessert, coca de llardons (typical Catalan cake, made from pork scratchings), served with a bottle of Penedès black wine. 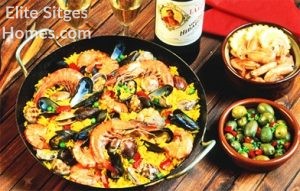 Sitges cuisine includes many Catalan sailors’ dishes such as rice Sitges style, stewed sepia with potatoes and allioli (Catalan garlic sauce), bull de tonyina (made with tuna fish), fideuada (similar to paella, but with noodles and seafood) or stuffed peppers with cod.

Malvasia is a delicate liquor wine served in Sitges, primarily with 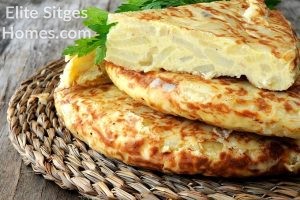 dessert. The name “malvasia” comes from the Peloponnesian port Monembasía. In Sitges, the Hospital Sant Joan Baptista continues producing and marketing malvasia according to the traditional method from its own vines and within its own cellars. The proceeds go to charity. The annual production is approximately 4,000 bottles.